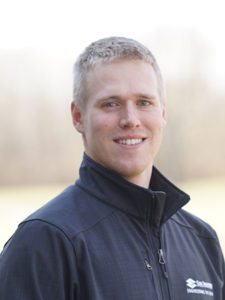 Justin is focused, dedicated and determined to succeed in everything he touches.  He was born in Louisville, Kentucky as the youngest of three children. Justin’s father owned a heavy highway contracting business and would take Justin on site visits and introduced him to the construction industry at a very young age.  These site visits are where he began to learn the construction business and develop an interest in engineering.

Like his father and older brother, Justin attended the J.B. Speed School of Engineering at the University of Louisville, where he graduated with a Bachelor of Science in Civil Engineering.  At UofL, Justin was a key member of the Cardinal Baseball Team from 2008 to 2012 and helped guide the Cardinals to 3 Big East Conference Titles and 3 trips to the NCAA Tournament. Following the 2012 season, he was named Big East Pitcher of the Year, 3rd Team All-American and selected in the 12th Round of the 2012 MLB Draft by the Chicago Cubs.  Justin worked equally as hard in the classroom as he did on the diamond, earning the Athletic Director’s Honor Role and Big East All-Academic Team each year at UofL.  Throughout his collegiate career, Justin learned to balance the rigorous class work of engineering school with the intense workouts and travel demands of Division I College Baseball.  The demanding schedule taught Justin to be very disciplined and independent, as he had to self-teach himself many engineering subjects and train for baseball late at night, long after his teammates had left the facility.

In the offseason of 2012, Justin began work with the United States Army Corps of Engineers in Louisville, Kentucky.  There he worked in the Levee Safety Program, a program designed to inventory, inspect, and assess risk for more than 2,500 levee systems nationwide.  During his time at USACE, Justin assessed 13 levee systems in the Ohio Valley.  Each levee assessment involved direct communication with the local governments that oversee the maintenance of each levee system.

Following the 2013 baseball season, Justin moved to Burlington, Kentucky to be with his fiancée (now wife), Olivia.  During that offseason, he worked for a structural engineering firm in Cincinnati, Ohio, working as a Design Engineer and CAD Technician.  His projects included many residential and commercial foundation repair designs, residential deck rehabilitation, foundation design for precast metal buildings, and steel erection plans.  For these projects, Justin worked directly with property owners as a structural consultant and also as a liaison between the owner and contractor.

Justin joined CSA in 2014 as a Project Engineer. His interest in engineering has always been in the geotechnical discipline of civil engineering and he was excited to have the opportunity to work for CSA.  Justin’s responsibilities at CSA include engineering project management, geotechnical design, and drafting. With CSA, he has completed the remediation of landslides, the design of drilled shaft retaining walls, Redi-Rock and Allan Block retaining walls, cast-in-place concrete walls, and foundation systems.

Justin’s baseball dreams ended in 2016 following his release from the Washington Nationals and he has since been full-time with CSA.  His interests include golf, woodworking, boating, and attending UofL Football games.

Justin is a registered professional engineer in Kentucky, West Virginia, and Texas and is currently working on his Master’s of Geotechnical Engineering at the University of Oklahoma with an expected graduation date of May 2020.